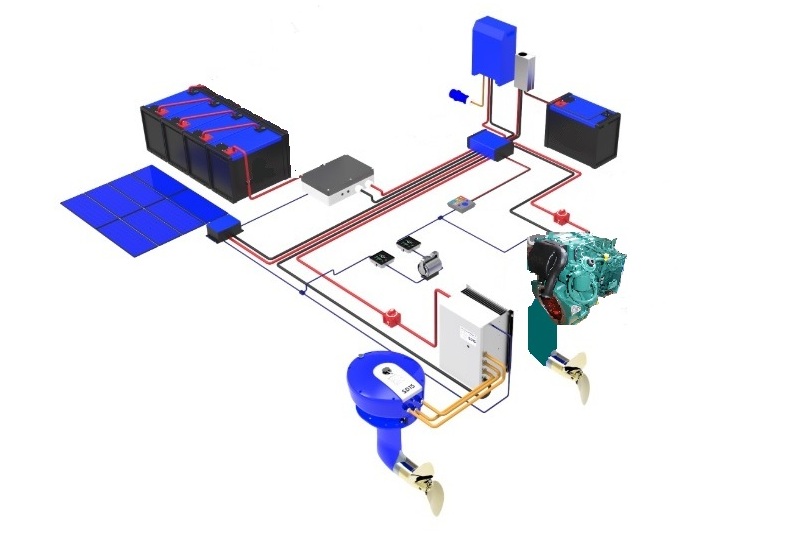 There are hybrid systems for cruising catamarans, which can cost over € 100,000 depending on the model, take up a lot of space and are very heavy. Cheaper systems are available for about € 60.000, which would be too weak for me. So for us such systems are unsatisfactory for the future. There has to be a smarter solution with a better price/performance ratio, otherwise it won’t work with the reduction of CO2 emissions in the yacht sector.

I have been dealing with the topic of electric propulsion for long-distance catamarans for quite some time, see also our article from our last visit to the fair: https://welt-ahoi.de/en/2020/01/25/which-catamaran-fits-to-our-blue-water-cruise/

There are already relatively long successful concepts for large performance catamarans and for catamarans in coastal use, whose batteries can be charged overnight. Since the Performance Catamarans easily reach speeds of over 6 kn when sailing, they can also generate power for the phases in which the engines need electricity for propulsion.

Cruising catamarans for the blue water areas look different. Due to their weight and design, they are slower and sometimes sail longer through calm zones. As a consequence, the electrification of such catamarans requires at least one diesel generator and a huge battery bank for the electric motors. Solar energy can hardly be planned for the electric drive, as many long distance sailors would also like a little more comfort from a variety of electrical appliances including a washing machine.

The bottom line is that the current concepts of the manufacturers of marine electric motors always require a lot of space for the large battery banks in addition to the space for the additional diesel generator. This makes the catamaran even heavier and slower. With such a concept, too little energy can be gained by recuperation (energy recovery) of the two electric motors while sailing.

There are always new projects, such as currently with the electrified Lucia 40 from Fountaine Pajot in collaboration with Volvo Penta with two of their prototype electric motors. But the concept is probably not yet ready for series production.

How can you do without an additional diesel generator?

I have already reported on this in detail in the following extra article:

All this inspired me to create the following smart hybrid system for catamarans:

Such a concept will work better on our favorite Nautitech 40 Open catamaran than on a Lagoon 40 or Fountaine Pajot Lucia 40, where the propeller is placed aft behind the rudder blades for design reasons. On the Nautitech, however, the propellers still jet the water at the rudders, which means that even with the motor drive, the rudder can only be driven reasonably straight on one side. And this is also used by the owners in practice to save engine hours overall.

We ourselves have been able to test the steering behavior with engine drive on only one side in detail for a week on a chartered Nautitech 40 Open. It is even possible to start with the starboard engine only and after some speed has been taken up, it is also possible to steer to starboard by adjusting the rudder. With a 30 hp engine it runs at a speed of 2200 approx. 5.5 knots and with both approx. 6.5 knots. With full ahead we reached 8 kn with both 30 hp engines.

So depending on the stored electrical energy, either the electric or diesel engine could be used more or less in the future. And if both engines are needed, they can of course be set to the same propeller speed. Whereby the one diesel engine should have at least 40 HP, since up to 11 HP must be subtracted for the propulsion of a 4.8 KW alternator.

A smart hybrid system, but unfortunately not offered as standard by one of the established brand manufacturers. This meant that hybrid systems could also be operated reasonably economically for cruising catamarans. In my opinion, following the example of the automotive industry’s mild-hybrid system, it is a bigger step due to the possible greater acceptance by customers. In order to achieve a real CO2 reduction in cruising catamarans, smart concepts are needed that the majority of the owners could / would like to afford.

The smart hybrid concept is also ideal for retrofitting if one of the two diesel engines is to be replaced. The old one then automatically serves as a spare parts supplier for the remaining diesel engine.

Of course, it would be ideal if a manufacturer of diesel propulsion systems and a manufacturer of marine electric motors were to join forces, for example with the catamaran manufacturer Nautitech. Then such a smart system with sophisticated control and regulation technology could be offered as standard equipment.

In any case, I will be writing to some of the brand manufacturers I mentioned on this topic bit by bit and report further. I’m curious to see who among the manufacturers is developing further for the expansion of a 48 VDC storage system on yachts that can be operated economically. Or perhaps one of the readers of this article has experience with a 48 VDC energy storage system or even with such a smart hybrid system for catamarans that is in use?

If you have any suggestions please contact us at ahoi (at) welt-ahoi.de